Throughout her career, Donna Cooper has been a dedicated and effective advocate for public education and Pennsylvania’s children, and one of the most influential voices for effective education policy both in the Commonwealth and nationally.

Since January 2013, Donna has been the Executive Director of Public Citizens for Children and Youth, the Greater Philadelphia region’s leading child advocacy organization that influences elected officials by combining useful research, practical solution-oriented policy recommendations with the mobilization of citizens who advance the organization’s work on behalf of children.  For two years before joining PCCY, Donna was a senior fellow at the Center for American Progress, where she led the Center’s research on early childhood education and public infrastructure and was a contributing researcher to the Center’s work to reduce the incidence of poverty.

From 2003-2010, Donna served as the Secretary of Policy and Planning for the Commonwealth of Pennsylvania where she was responsible for the state’s education, public supports, environmental, and healthcare policy.  While in this role, she led the development of the Cover All Kids program which expanded access to affordable healthcare to nearly every child in the state.

Donna also led the seven year effort to boost funding for public education that increased K-12 funding by over $2 billion and designed the state’s groundbreaking school funding formula which was enacted in 2008.  She also helped launch the state’s model approach to investments in early childhood education, and promoted new policy to ensure that community college students can more easily transfer credits to four year colleges.  When she left her state post in 2010, then-Governor Rendell said his administration was losing its “conscience” and “soul.”

Donna also served as then-Mayor Rendell’s City of Philadelphia’s Deputy Mayor of Policy and Planning from 1999–2002 where she designed and led the Greater Philadelphia Works Program, one of the nation’s largest and most successful efforts to help single mothers on welfare achieve self-sufficiency.

Donna founded Good Schools Pennsylvania, a grassroots organizing campaign that fought for equitable funding for public education across the state and successfully pushed public education to the top issue in then-Mayor Rendell’s 2002 race for Governor.

As head of Good Schools Pennsylvania, the policy leader in the Rendell Administration in Harrisburg, and in subsequent roles, Donna consistently has been supportive of the work of EPLC, especially around school funding issues.  Donna earned a master’s degree in Government Administration from the University of Pennsylvania and a master’s degree in Intercultural Management from the School for International Training in Brattleboro, Vermont. 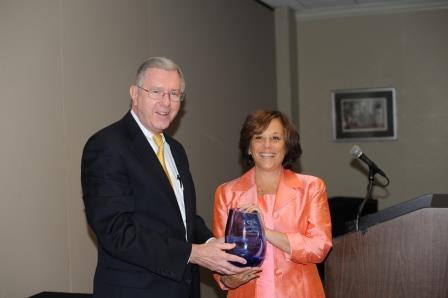